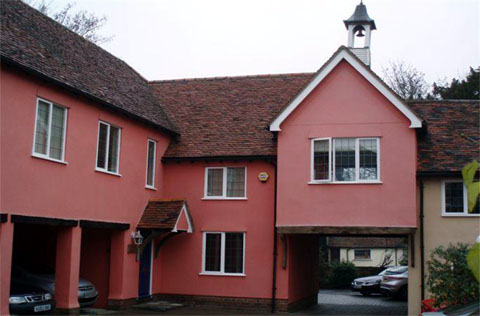 All Wales VitalData Renal System
Our system in Cardiff has proved so successful that plans are now underway to expand its use across the whole of Wales. This project will include Wrexham which sadly became a victim of the collapse of CHI. Patient records will be exported from RenalPlus and imported into the Cardiff system along with a new LIMS results interface.

Edinburgh Royal Infirmary, Fife and Borders to form the new eSERPR system
A new VitalData renal system has been ordered for the east of Scotland. This is to be located in Edinburgh to replace their old Proton system and will be based on a similar model to that provided for the West of Scotland (wSERPR) with some local variations, particularly in the area of transplantation. This is expected to go live towards the end of 2014.

Great Ormond Street Hospital, London
We are very proud indeed to welcome Great Ormond Street as a VitalData user. Having won the contract through European tender in January 2014, Vitalpulse prepared and installed Phase 1 by 31st March, complete with PAS and laboratory interface service frameworks on the Trust servers, all ready for their new Integration Engines. We are working with the IT department to prepare these interfaces for go-live as soon as they are set to go.

Cliff Snow joins Vitalpulse
We are very pleased indeed that Cliff has agreed to join us as our full time Project Manager. Cliff is a Prince2 practitioner and will be heading up and coordinating all our installations and upgrades in the future.

Royal Hospital for Sick Children, Glasgow
Yet another addition to the West of Scotland VitalData system based in Glasgow (SERPR) is the paediatric renal system from Yorkhill. This was a mature pre-loved Proton system that had passed its sell-by date. All patient data was migrated into SERPR and we included charts for growth curves and Z-scores for good measure. Laboratory interfaces were extended to include the new unit.

Royal Free London – July 2012
Another contract for VitalData won via competitive tender has gone live. And we are very proud to include the Royal Free London in our distinguished list of clients.

Monklands Hospital, Lanarkshire
The latest addition to the West of Scotland VitalData system based in Glasgow (known as SERPR) is Monklands. This involved data migration of historic patient data from their Mediqal eMed system to VitalData and the addition of another SCI-Store laboratory interface resulting in a smooth and stress-free upgrade.

SERPR has won the 2010 NHS eHealth Award for Best IT Service Delivery
We are all very proud to be associated with this exciting VitalData project.

June 2010 – SERPR IS LIVE
The Greater Glasgow & Clyde VitalData System, known as the Strathclyde Electronic Renal Patient Record or SERPR (pronounced “serper”) went live in June of this year. It replaces two aging Proton systems at the Royal and Western Infirmaries, and covers a huge area from Stranraer, through Kilmarnock, Inverclyde, the Vale of Leven up to Loch Lomond and the Highlands, across to Forth Valley and down to Dumfries and Galloway. The system went live with all historic treatment data on 40,000 patients migrated from the systems it replaced, and with over 800 users. It includes interfaces to 6 SCI-Store demographic and laboratory results systems using the latest Notification Services module, ensuring prompt delivery of updates and results every few minutes. There’s also the added bonus of 12 months of historic data transferred automatically whenever a new patient is registered on SERPR. The system also enjoys links with their AD&T system and 4 Fresenius Finesse haemodialysis machine networks providing up to the minute details on admisisons, discharges and haemodialysis treatments.

We are delighted to announce the news that Vitalpulse has been selected to supply a new integrated renal system for Leeds, Hull, Bradford and York replacing the two Proton systems based at Leeds and Hull. We look forward to embarking on this exciting new project.

Welcome to Steve Short
Steve joined Vitalpulse in May this year to head up a project implementing a new VitalData interface to the Scottish SCI-Store system.This innovative and size=”-1″>challenging project retrieves patient demographics and laboratory results via notification services, and potentially provides a scalable solution for the whole of Scotland. It will be a lynch-pin in the new SERPR system that is scheduled to go live early in 2010. More on this project later!

Steve has worked in the IT industry for over twenty years with the last fourteen spent in Microsoft Windows application development. His experience has been gained working for companies including Microsoft, ITV, GAME, Pfizer, Smith Kline Beecham, and Bovis Construction. Vitalpulse is very lucky to have secured his services.

N3 connection installed in VP offices – April 2009
Having obtained our IGSoC accreditation during 2008 we naively thought that ordering our N3 installation would be a simple matter requiring just a few days notice. Far from it. Following numerous visits from an army of BT engineers, and a couple of false starts when essential pieces of equipment failed to arrive, we are now happy to announce that our N3 connection is at last live and operational. Many of you will have received a Third Party Filter Change Request form from us, and we have already received a number of signed responses. These have been passed to BT for processing which, we are assured, only takes a few days. This new service will significantly improve the availability and speed of connection to your systems, and the level of service available from Vitalpulse.

Vitalpulse Bell Tower Overhauled
As mentioned in previous news the Vitalpulse bell is rung whenever a new sale is closed. As you can see from the photo the poor old thing has taken quite a hammering lately and is now in need of a complete overhaul. Could this herald the end of the bell?! 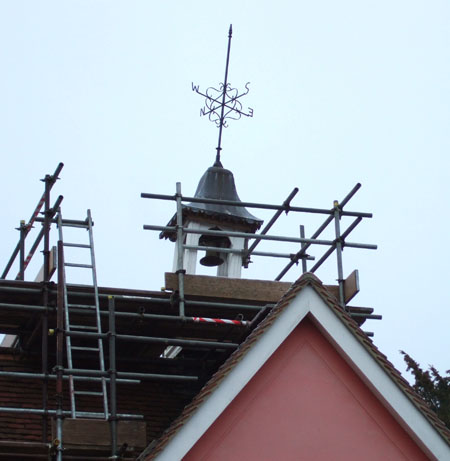 Tim Murdoch appointed Head of Customer Support at Vitalpulse
Having been made redundant in January 2009, Tim has joined us at Vitalpulse to head up our Customer Support Services department. Although he probably needs no introduction to most of you, he’ll be contacting all our clients across the country just to say “hello” and to check that everything is satisfactory. You can contact Tim at tim@vitalpulse.com or via the usual support hotline:
01371 874285

BT eHealth Insider Awards
Renal PatientView was nominated for an award in the category of “Best Use of ICT in Patient and Citizen Involvement” at a ceremony held at the Millennium Mayfair Hotel, London, on the 17th November 2008. Congratulations on being the runner up in a very prestigious and closely fought contest. Whatever the outcome, a great time eHealth Insider Awards was had by all. 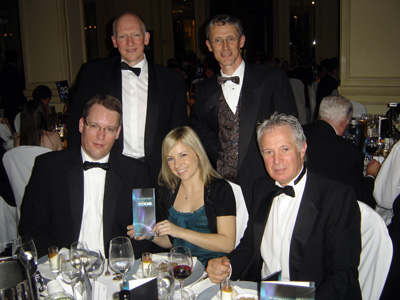 Swansea next in line for VitalData
Morriston Hospital has placed an order for VitalData to replace its aging Novell based Proton system. A baseline implementation of VitalData has just been installed including all their current demographic data, clinical details and pathology data. We are now in the process of migrating their remaining screens and upgrading the pathology link. The new system is expected to go live in February 2009.

BRS/RA 2008 in Glasgow
The exhibition was a great success. We were inundated with visitors wanting demonstrations of VitalData, in particular its latest configuration utility, and to sample our peppermint creams and Rocky Road cookies. We apologise to those who either had to wait a while or found our stand a little too busy. Here’s a photo BRS 2008 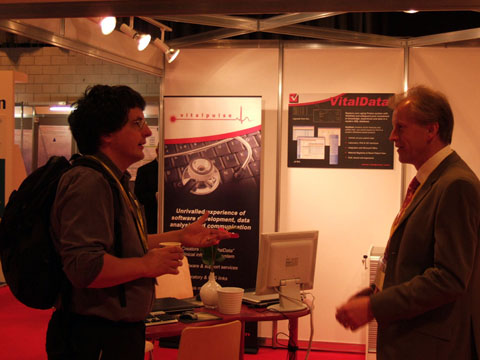 of a visitor with a bulging backpack just minutes after our 24 inch monitor went missing. Anyone recognising this individual is asked to contact us immediately. He needs to be told that not everything on our exhibition stand was a freebee.

Welcome Tom Melly
Tom has now joined us
at Vitalpulse. We’ve known Tom for years and we are very pleased to welcome him to the team. Tom is an accomplished software designer in his own right. His responsibilities will include development of laboratory, PAS and dialysis machine interfaces, plus of course an element of support.

>Derby City gets VitalData
On 22nd February VitalData went live at the Derby City Hospital Renal Unit, right on schedule. The database was fully loaded with all historical patient data from their old renal system, and all external interfaces were operational from day 1, including laboratory feeds, Renal Registry reports, Renal Patient View, and even a new PAS interface for automatically registering new patients and maintaining existing demographic data.

Dr Maarten Taal, Consultant Nephrologist at Derby City says: “You and your team have done a superb job throughout this process and we are very pleased with the system that has been delivered. We are confident that it will bring significant improvements to our ability to monitor and deliver patient care.”

Vitalpulse founder, Andy Webb says: “We are absolutely delighted that Derby has decided to invest in VitalData. Their data is now secured for the future in an industry-standard environment and is more accessible than ever due to the proliferation of reporting tools available.”

He continues: “Derby already uses Crystal Reports throughout the Trust and they intend to use it for all future data reporting from VitalData.”

For those interested in upgrading, Vitalpulse offers the option to convert to nationally accepted standards, including the UK Renal Registry timeline.

RPV Award for Excellence
Congratulations to the Renal Patient View team. Earlier this year the project was awarded the “NHS Leadership in Health Informatics Accolade”.

We are proud to be associated with the project. Responsible for designing the XML schema, file construction and encryption mechanism, and the continuing deployment of data collection and transmission procedures. We are currently completing the 20th installation and hope to have all sites up and running over the next few months. In parallel with this we are implementing an upgrade to RPV phase 3, which includes new data items, re-send options with user defined date ranges, and improved security measures.

National Renal Dataset
In 2004 Vitalpulse was commissioned by the NHSiA to assist in the compilation of the National Renal Dataset for NPfIT, now Connecting for Health. We completed this in consultation with UK Registries and UK Transplant. A discussion document has now been published and distributed by the Dept of Health and the Renal Association. We will be maintaining an active and watching brief on this project, and consideration of the proposed data items will form part of our database planning strategies.

Our Carbon Footprint
Part of our new environmental policy (produced in response to recent NHS contractual requirements) restricts site visits to essential on-site development work only. This may cut down on carbon emissions but could mean that we don’t meet our clients face to face nearly as much as we’d like. However, we anticipate that it shouldn’t impact too much on our day-to-day procedures as we have always undertaken most of our work by remote access as far as possible. In fact most contracts are already negotiated, designed, prototyped, deployed and commissioned without setting foot outside the office, reducing project costs by as much as 30% – a saving that is passed on directly to our clients. 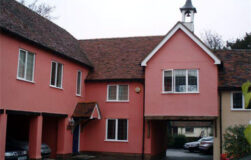 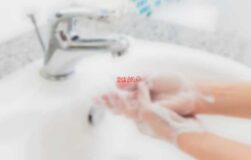